Falling freight demand in first quarter 2007 pulled USA Truck's earnings down 96.7 percent, and one analyst sees no relief ahead soon.

"The industry is facing weak demand," said Donald Broughton, senior transportation analyst with A.G. Edwards in St. Louis. "I don't currently see any reason for demand to pick up. However, if it does pick up, then being an efficient operator and the low-cost provider of that service brings some very strategic advantages. I'm not recommending the shares right now, even though I've been a big bull on the stock in the past. When they have the wind at their back though, they're a fast sailboat."

(A.G. Edwards or its affiliates expects to receive or seek compensation for investment banking services from USA Truck within the next three months and has received compensation within the last 12 months. AG Edwards and/or its officers have a long-term investment in USA Truck's equity securities.)

"Freight demand did improve from lows in January and February to a steadier fright environment in March," Jerry Orler, USA Truck president and chief executive officer, stated in a news release.

Broughton said it's too early in the year to tell whether the improvement in March was part of the ordinary seasonal lift in demand that truck carriers get in the spring or part of a positive change in the business cycle. 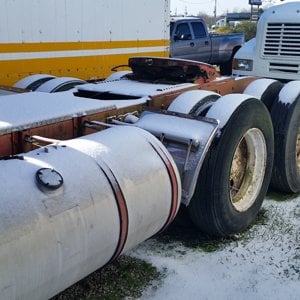