Staff member
CIUDAD JUAREZ, Mexico - More than 500 trucking companies in Mexico have applied for a permit that would give them access to U.S. highways. But some leading Mexican companies are reluctant to participate in the pilot program.

Under the program the safety inspections routine at the border crossings will now extend south of the border.

U.S. authorities instead will do extensive inspection on site in Mexico of trucking companies that want access to U.S. roadways

With an extensive safety program including onsite company inspections, a large fleet of trucks and experience hauling cargo across the border, you might expect the Mexican trucking company Fletes Sotelo to be among the first to want to expand throughout the U.S.

But Manuel Sotelo, the owner of the Juarez based company says he's not interested.

He cites what he calls discriminatory treatment in the 25 mile border buffer zone where Mexican trucks are now allowed. He says it would only get worse for truckers traveling across the U.S.

Mexican trucking companies say do not judge their entire fleet by what you see at the border. That's because they send the oldest vehicles to international crossings. That's because the trucks often spend hours in line idling while they're waiting for inspection by U.S. border authorities.

Even so, most of the older trucks pass inspection and then hand off their cargo to a long haul trucker in the U.S.

Experienced trucking companies in Mexico predict the practice will continue because it's the most cost effective way to move cargo across the border.
HOUSTON, TEXAS NEWS | KHOU.com | News for Houston, Texas 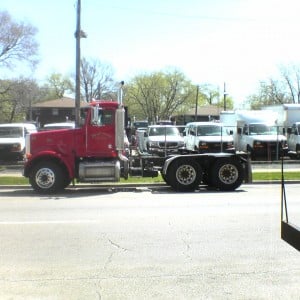