In a late-night teleconference Thursday from Washington, DC, the U.S. Transportation Department announced the official OK for a cross-border pilot program.

FMCSA Administrator John Hill told reporters the U.S. plans to give up to 25 Mexican firms permission by the end of September and add another 25 companies each month until hitting 100 by the end of this year under the one-year pilot program

For now, two trucks from one Mexican trucking company have been approved to haul cargo anywhere in the United States. Hill identified the company as Transportes Olympic, based in Monterrey, Mexico, a suburb of Nuevo Leon.

Both companies can cross the border immediately, but may not do so for several days while they determine new routes and handle details such as insurance, said Hill.

Jesus christ, I have not seen one person for this and they still go forward ****ing with the system. Might as well target these truckers who knows what they will try to smuggle into the country.
•••
Upvote 0

between a rock and a hard place

Well, I held out hope that somebody could stop this, but it appears this administration decided to ignor EVERYONE and do it anyway.

It won't be real bad at first though. The companies getting in on this will make a big effort to keep this running as smooth as possible, and the security inspections will be much tighter in the beginning.

What I fear is a few months or so down the road, when things become relaxed. That is when this is going to become a huge problem.
•••
Upvote 0

This isn't going to affect me "directly" with my current driving job, but it will affect me indirectly.

We don't haul any freight that goes into or out of Mexico, but those that are directly affected by this will be looking elsewhere for freight, which will increase the competition for other freight, driving the prices down, and making it harder to get loads.

This is a sad week for the trucking industry, as far as the drivers are concerned. Great for the large companies who have already gotten their hands into the international freight and have been pushing to get this approved.
•••
Upvote 0
L

between a rock and a hard place

how soon untill mexican trucks start haulin goods in the the united states for us co. just a matter of time why pay an o.o. or us trucking co.1.18 cents per mile when you can pay 75 to a mexican the people in washington don't give 2 shits about middle class working people only care about themselfs and rich like them
•••
Upvote 0

Mexican drivers are restricted from hauling freight within the United States. They can only bring freight in from Mexico, then take freight back to Mexico.

Wouldn't surprise me if that ends up changing at some point as well though.
•••
Upvote 0

We could be looking at a collapse of an entire industry. And at 65% of freight moved, its not an industry I am looking forward to. But all it takes is one too many calls from a receiver to a shipper about late loads, which means late goods on the shelves which leads to all sorts of problems. It's a very confusing time.
•••
Upvote 0

I wonder if these companies will be hauling produce out of Mexico? I know that there is quite a bit of produce freight that runs out of Mexico into the markets in New York City.

Can you imagine a 6-7 drop produce load in the Bronx? Of course, I imagine they will let the U.S. companies keep these crap loads, they will haul the good stuff themselves.
•••
Upvote 0

I think I am going to be sick with this topic. Mexicans hauling Our border freight! Can this country care less about US truckers?
•••
Upvote 0

gumby said:
there goes the pay scales untill anyone grows balls and shuts down we will aways get ****ed the ata is doing a great job what a joke hope you drivers have other skills to get another job se' habla espanol
Click to expand...

Good post! Shut down and make a stand.I know it's easier said than done but one week will stop this. My truck has been parked for a while now.The media is as corrupt as the politicians and working in concert but if half the trucks in the US shut down for one week we will get our point across.Without the owner operators alone we will cripple the nation.

Watch The Capitalist Conspiracy on Google Video. It will be 47 minutes well spent. Our children's future depends on the stand we make ,or don't make.
•••
Upvote 0 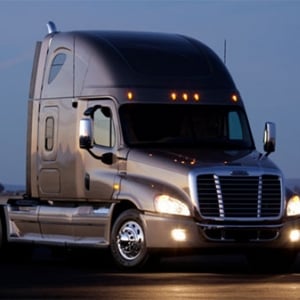